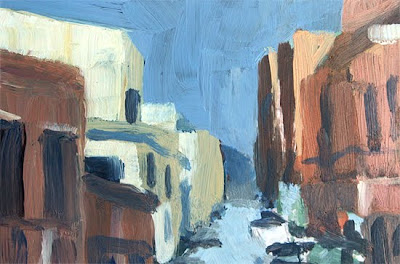 Been mysteriously waylaid, and forgot to post this other street scene from Stan Cruz in the Canary Islands. Bit of traveling on tap, so no posting for a bit, but plenty of inspiration when I get back. 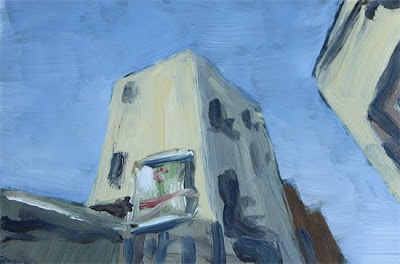 From another location I picked as a possible place to paint using Google Maps. What actually appealed to me about the screen rendering was the extreme forced perspective, so I thought I'd go with that. This is a 15 minute timed piece, made a little easier because I already had the palette laid out from doing the big one of Calle Sacramento. 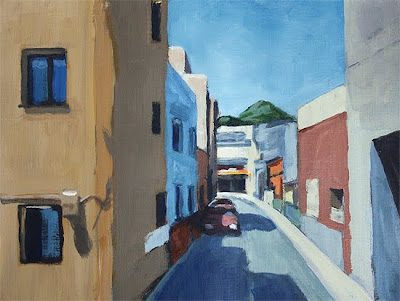 I've been following an interesting group and decided to participate this month. The Virtual Paintout website supplies a different location, via Google Maps co-ordinates, as the setting for a group outing. This month the spot is the Canary Islands.

Actually my only real gripes with this, is that Google Maps behaves badly, especially in terms of retracing one's steps, and there's too much to see. I think I spent more time wandering around than I did painting (though, in truth, this often happens when I go outside too).

I found a few spots and took screenshots. The scenes one sees in Google are often very distorted, with an oddly exaggerated perspective, and they often have missing pieces.

As with the old Different Strokes site, any physical media is acceptable and any level of experience, so there's quite an array of artwork and locations at the Virtual Paintout site already, and it's only the middle of the month. 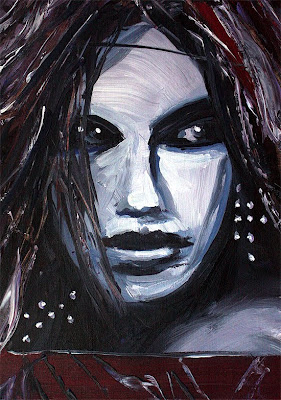 I was mailing out a collage postcard I'd made for the Art League Now! Post Card Arts Gang, when I thought it might make an interesting subject to paint.

Since it was mostly black and white, I thought I'd try a very limited palette and try to keep it spooky and dramatic. 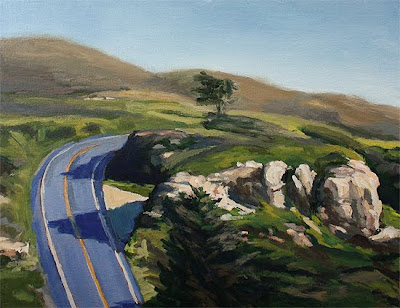 It seems to have become a lot darker, but that's party due to the fact that I photographed it more accurately this time. And that I did darken things up a bit too.

The rocks are now taking on a more dimensional look, and the blues don't jump to the front as much. I think that little tree has to go, or be moved somewhere. The distant hills just aren't doing it for me. I can't decide what color or value they really are or should be. In the photo:

1. They're green, because they're covered with rich spring vegetation.
2. But they're less saturated, because they're far away.
3. Which means they reflect more blue light due to the distance
4. Though they are reflecting the warm light of the sun as well
5. And they have reds, purples and browns of the rocks, soil and dead vegetation.
6. But they should have less detail and be simplified to not draw attention away from the focal point, which is...

So, if I had to pick one color to make those hills... I just haven't found it yet.
No comments: 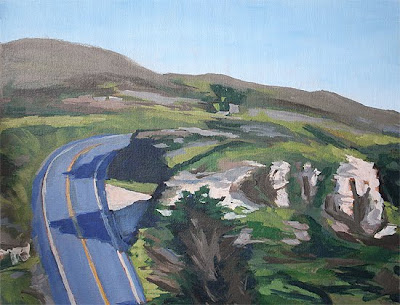 Finally, I got to block in the major color shapes and even got to start refining and adding in secondary colors. And now I'm stuck.
It looks so flat and unexciting. The colors and details and sharpness in the far hills needs fixing, and sharp, big brush-strokes in the foreground need to be addressed. I also need to round out some of the rock formations in the middle ground, giving them some warm and cool sides. I'm just not sure where to begin the next steps.
I'm hitting the Kevin McPhearson books tonight to see if I can remember what I've forgotten.
Any clues, greatly appreciated at this point.
1 comment: