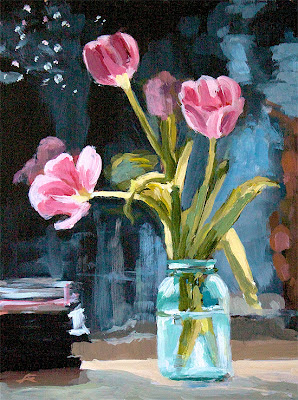 I selected this scene to paint for the Daily Paintworks Gift Challenge II.  Basically the theme was to paint something that was given to you as a gift that has a special meaning to you. For me it's this jelly jar I was given years ago, made even better because the flowers in it now were another gift.

It's sitting in the window right now, and there are only three flowers (the other splotches are the reflections in the window).
1 comment: 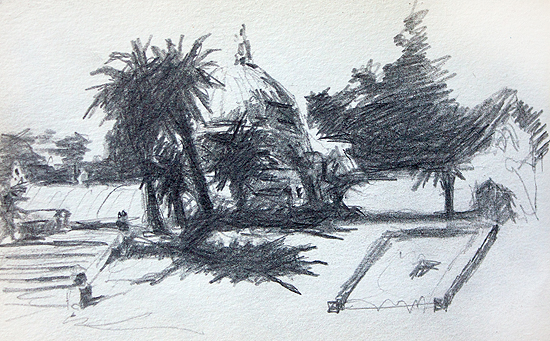 Another value sketch of the Conservatory of Flowers, focusing only on shadows.
No comments: 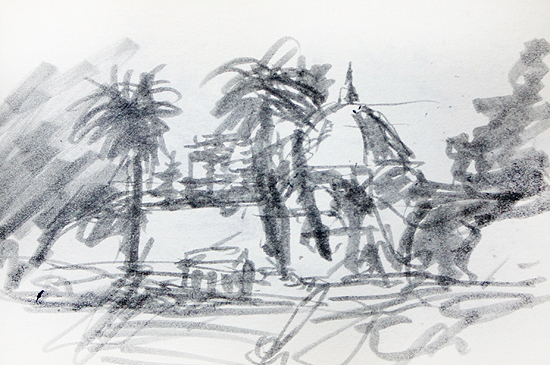 It's sketchbook Wednesday. Actually, I've been too buy to paint recently. No, really.  But I do have to get out for a walk every day so that atrophy doesn't set it.

So I've decided to take a sketchbook with me and do some field sketches, and then post them, just so you know I'm not completely abandoning my creative development.

Above is a sketch of the Conservatory of Flowers in Golden Gate Park. 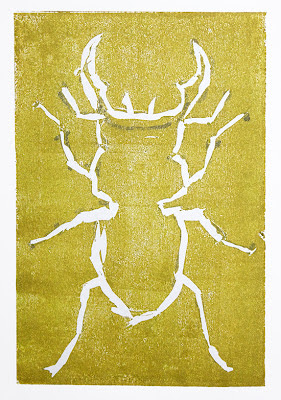 Starting to get caught up on the other non-creative nonsense around here and getting back to making art. And here's my submission for this weeks Daily Paintworks Challenge: The Insect Challenge. (in case you're not familiar, I chose as my subject the might stag beetle).

I'd bought a bunch of supplies to create some linoleum prints because this is something I've been itching to do. Naturally, I bought the wrong stuff. Well, wrong for the tools I had.

So, I simplified my design a bit, and just went for it. I tried printing with a thin layer of paint, but it was too hard to control, so I cleaned everything off and when with stamp-pad ink. Also, trying to transfer directly to card stock did not work, but paper did quite well.
No comments: 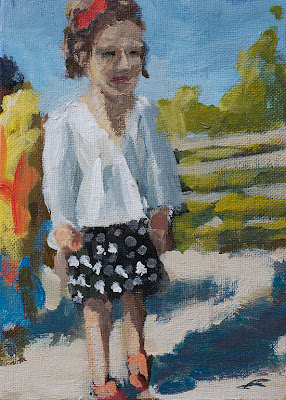 
Well, I thought if I kept the canvas small, I'd be forced to simplify, which was generally true. It's just so hard to make a face with only three brush strokes and be satisfied with it. I mean, it would be easier if it was just one face in the crowd, but when it's the subject of the painting, it's really hard to leave well enough alone.

I must have scrubbed this face out and started from scratch a dozen times. Each time I'd just cross that line of too much detail, and wound up making everything cartoonish or mask-like.

Well, as I've found with things on this scale, that just a few millimeters in one direction or the other can really distort proportions. Not so bad with trees, but terrible when painting humans. So, head too big, legs too short, and more plagued this piece. Other than that, I really like it. Ahem.

Just another rush job, with lots of poor judgements in order to submit to the latest Daily Paintworks Challenge - Polka Dots.
No comments: 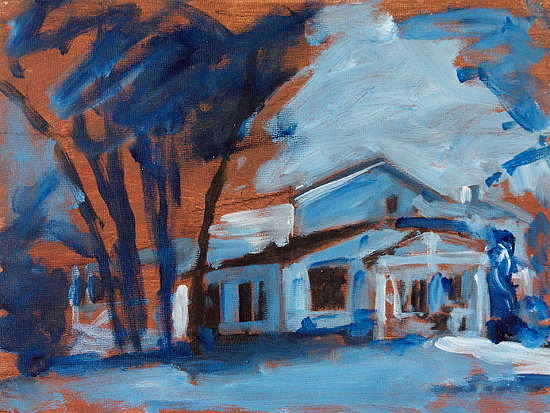 I had a short window of free time, so I set up and decided to just concentrate on values for this one, using only ultramarine blue and white. It was also easier to keep just two blobs properly damp in the hairdryer environment that is Sonoma on a hot n windy day.

Not sure if I'll turn this into a finished piece or not. I think the cropping might be a bit tight.
No comments: