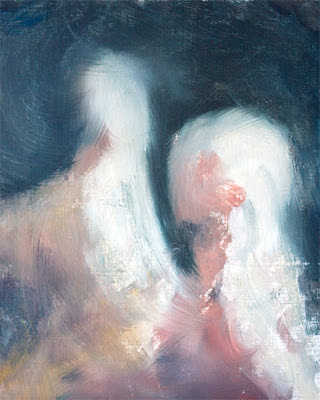 Oh, there was still plenty of time before dinner and paint already laid out, so I decided to let the brushes guides me to this. I don't need to tell YOU what it is, it's so obvious, but I thought I'd give it a misleading title just to confuse a bit.
2 comments: 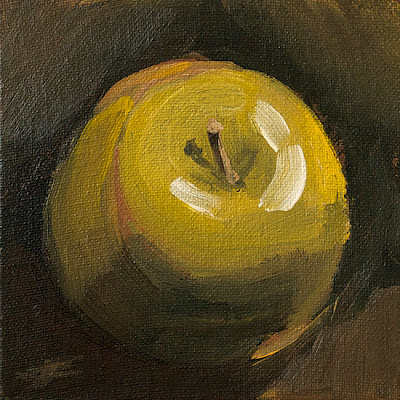 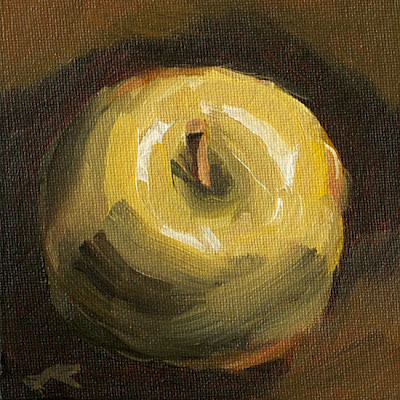 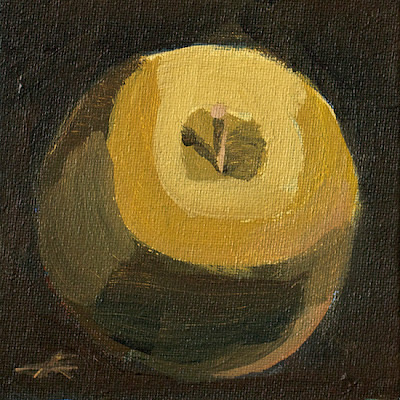 I'm way ahead of schedule with this week's Pare Down Your Apple Challenge. I opted for a dark and moody set-up (perhaps too dark).

Since the goal was to paint the apple with as few color areas as possible and still have it read as an apple, I decided it would be a good idea to pre-mix four puddles of color, and just use that as a starting point. A great idea in theory, but it falls apart if you make the wrong mixtures. I couldn't believe how off I was.

So, I adjusted the mixtures a bit and then decided I'd have to just forge ahead. I've heard that as long as the values are correct that color doesn't matter so much. I think my results bear that out, at least a little. They look like apples, but are way off the actual colors I was seeing.

The funniest mixture I made was a combination of 4 colors (can't remember now) and when I was done mixing, I had achieved an exact match to yellow ochre, which was already on the palette. Great.

In any case, the first one I did (middle one shown here) had too much detail, missing the point of the exercise, so I did another (top) and then finally an overly simplified version (bottom). That Carol Marine makes this look so easy, and for some reason its seemingly impossible for me. I'd like to think I'm learning, but I don't think any of these are truly successful, and to top it off I did this same challenge a year ago. Ugh.

I think I could do this every day for a week and not make any progress. Hmmm, that sounds like a ... challenge? Not sure I could survive it. We'll see. 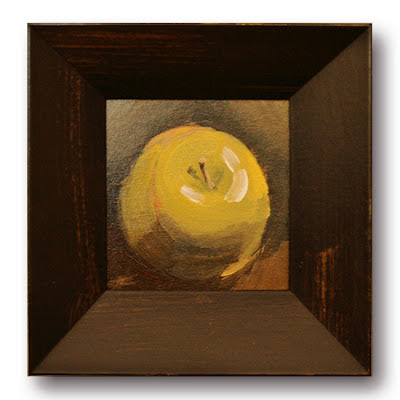 UPDATE: What a difference a frame makes! Rick, who bought the topmost apple image sent me a picture of the frame he chose for it. He says it's a Roma, style #4186. I found their website at: http://www.romamoulding.com/en/products/productlist.aspx?Search=4186
No comments: I already inadvertently painted crumpled paper for last weeks challenge, so I thought I'd try a different medium this week, for the Daily Paintworks' Crumpled Paper Challenge. I thought this would be an easy alternative, and I was very wrong. Easier set up and clean up, but that's about it. 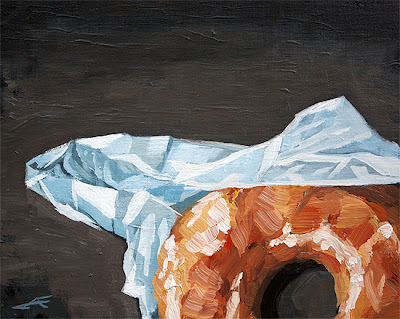 Finally got a chance to do the Donut Challenge at Daily Paintwork. I don't eat doughnuts, or donuts. Really, I don't. But what a great excuse to...

When I got home I dragged it out of the bag with the flimsy little piece of paper they had at the Krispy Kreme stand at the gas station, and put it on my coffee table. And there it was, looking like one of those Flemmish paintings where ancient royals showed off their new and rare delicacies from the spice trade, such as oranges, pineapples, and the like. I photographed it as a reference, and insurance in case it didn't survive the morning, and this was the way the composition turned out. I liked it, so I went with it. Happy mistakes and all that.

I really don't get the appeal of Krispy Kreme. Doughnuts are a major memory stronghold, and if one is going to risk the calories these days, it's gotta be dynamite, and these are just so-so. This one looked kinda sad and was sticky/slimy, and wasn't any more fun to eat. In fairness, there's no way to know how long it sat there. The good news is that having discovered doughnuts only two blocks away, I pleasantly surprised to find this version not at all tempting.
1 comment: 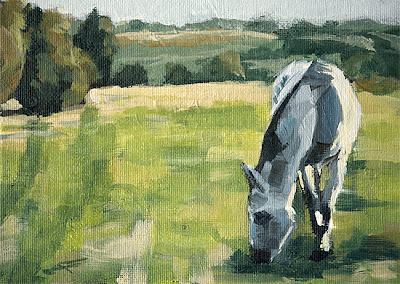 This is my submission for this week's Daily Paintworks Challenge – Horsing Around. I altered the composition a bit (intentionally), and apparently the anatomy too (unintentionally).

I'm experimenting with brushes. I did the whole thing with a #16 Flat synthetic brush (about half an inch wide). I thought the natural brushes I was using before held too much paint, so I'd try a synthetic brush. Turns out this one doesn't hold nearly enough paint.  Classic Goldilocks syndrome.

So, not only am I not mixing enough paint, and applying it stingily, but my brush is making it even thinner. Just think of all the paint I'm saving! (ahem).

I think I'll move back to the natural brushes for now.
4 comments: