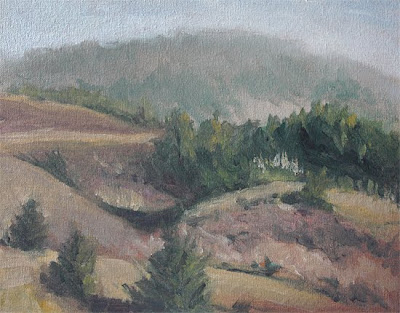 On the last day of the workshop, we went out to do a little plein air work. Finally, no more skin tones, or eye socket shadows, or figure drawing!

Well it was a bit easier, but I wound up rushed for time, so this is really what I'd just consider half done. Still, I got some excellent pointers from Craig. Bonus. 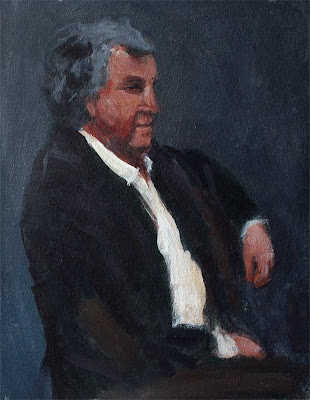 Acrylic on Canvas Panel - 11 x 14 inches Ω
Last studio painting of the workshop week. Not as successful as earlier in the day, but I did manage to follow the guidelines of the method.
Lighting had now become an issue for me. I couldn't get the right kind of light on my work and palette. The clip-on light I'd brought gave too much glare and as a result I could really see what I was doing without moving from side to side. Although it looks really dark here, I felt like it was thin and washed out while I was working on it. Really bizarre. I guess I've just become very used to my cosy home studio set-up.
No comments: 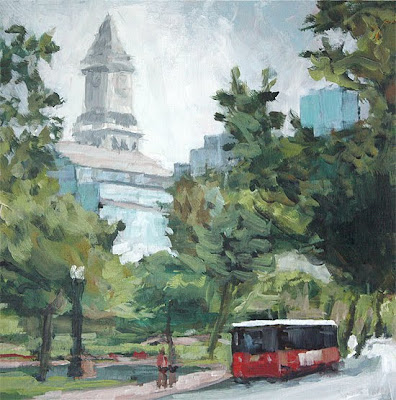 January's Virtual Paintout is in Boston. Some place I've actually been to, though the last time I was there it was covered in snow.

I'm not sure that clock tower is, but hopefully someone will write in and let me know. The view is from along Atlantic Avenue, heading SW. 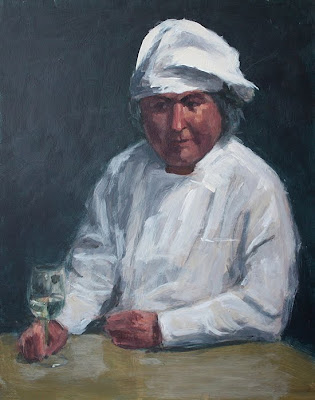 Acrylic on Canvas Panel - 11 x 14 inches Ω
On the last studio day, things are starting to fall into place. I'd been painting in my sleep all night and kept coming back to the determination that I would stick to Craig's method no matter what the results.
I picked a good spot with good lighting, and yet still some strong shadow areas. I get pretty far along on this, but was having real trouble with the skin. Everything was getting chalky. When I asked Craig he said that because I had painted in the medium tones too light, forcing me to make my "light" lights too light and washed out. Basically you have to leave room in your tonal range to go lighter (or darker) and still be far from reaching the lightest highlights or deepest shadows. Really opened my mind.
So, I went back and painted back over the mid-tones and then the shadows and lighter tones. Theoretically, the top of the hat should be the brightest white – lighter than even the lightest parts of the jacket or face. Makes sense.
1 comment: 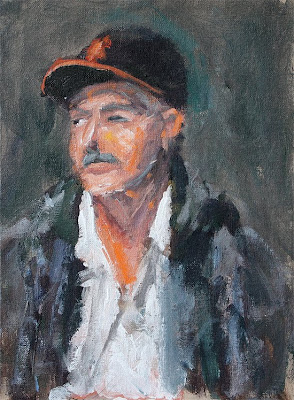 Late evening series of poses with the same model as the afternoon. For some reason I wound up ignoring just about everything about Craig's technique and wound up reverting to my usual impressionist type method. I think I was just tired and rushing through.
Actually I started off using his method, but I think I grew impatient. Part of Craig's method is working up the large shadow areas and near-light areas and comparing them to each other and focusing on getting those relationships just right, saving details (you know, the fun stuff like eyes, buttons, highlights etc.) until the very end. It makes perfect sense, but it's really hard to resist.
You are meant to work quickly, but it's very methodical as each step leads to the next step. If you don't get step 2 right, you will fail at all subsequent steps. I rushed some early steps and the piece suffered from there on out.
No comments: 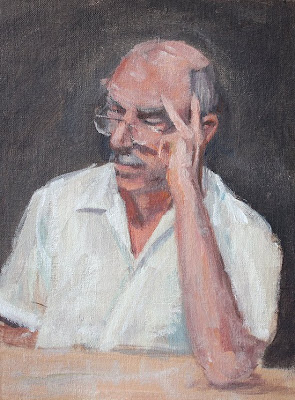 Acrylic on Canvas Panel - 9 x 12 inches (destroyed)
On day 4 I feel like I'm starting to put things together. A better drawing from the start, better color matching etc. Still can't believe how quickly three 20-minute sessions goes by.
I'm also finding that picking your spot is a big deal. I mean when someone else is setting up the pose and the lighting, what you thought was a good spot may suddenly become a boring view. I thought I had a good angle here, but with the light source directly between me and the model, almost all the shadow areas disappeared. I'm not saying that's the only reason this turned out a little dull and flat looking but...
No comments: Acrylic on Canvas Panel Ω
I decided that it was too hard to paint the face with such a tiny brush on a small canvas, not to mention the whole figure, so I opted for just a headshot. Unfortunately I was so far from the model that I was essentially painting her head 4 or 5 times larger than what I was seeing – not ideal for the "sight method" I'm sure you've heard about.
In any case, after two or three sittings, I managed to render a very mask-like image (looking a little like a primitive Gaughin) though not intentionally. I just couldn't see how I'd got stuck there. Craig pointed out that I was still applying the paint with too firm a hand and that this left me with very hard edges, making it harder to create softer transitions as the planes connected to make a "round" face. Basically I was stilly drawing with the brush and not painting.
Not seeing the model as a reference here, it looks almost passable, and definitely improved after Craig's help, but it is a far cry from what I was trying to do. Frustrating to say the least, but I did feel that more and more I was not only grasping what he was talking about, but was beginning to actually incorporate that knowledge.
No comments: 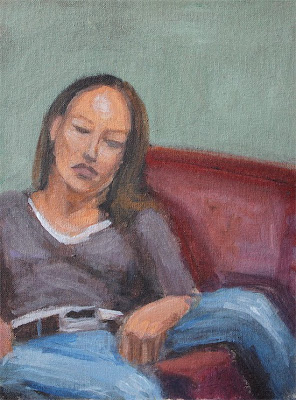 Acrylic on Canvas Panel - 9 x 12 Ω
Just got back from a week of painting at Craig Nelson's workshop in Pescadero, CA. If you ever get the chance to study with him, jump at the chance. I had a great time and learned enough that it'll take me years to digest and incorporate a tenth of it.
It was quite a humbling experience to say the least. Most of the workshop's I've been to feature a wide sampling of artists at different levels of experience and abilities. Almost everyone at this workshop was quite serious (about painting at least) and very skilled. I felt like a I still had training wheels on the whole time!
I'll spare you the truly horrific attempts I did, plus any that I didn't actually finish. I'm not used to running out of time, since I tend to work quickly. Most of the model sessions were either four or eight 20 minute poses. However, as I was trying to follow Craig's method, which is quite different from my normal process, I never really quite got into the flow of things, though I did fully grasp the concept (especially while watching the maestro painting a demo or two).
My biggest stumbling blocks were:
1. Drawing. I really haven't kept up with life drawing and it showed. I've just gotten in the habit of using drawing from flat screens and photos, ones that already have been cropped to the right dimensions, that I wasted a lot of time figuring out how the figure should be rendered.
2. Color and value. Apparently there's a lot more shades and subtlety of tones in the human form that we feel we'd like to see to affirm that it is a face, rather than, say a tree, which still looks very tree-like with only two or three colors.
3. Brush work. I generally attack the surface with every stroke, but Craig's technique employs a range of strokes from firm to barely-there. These lighter strokes are key in developing softer edges and transitions – something I had not really focused on prior to the workshop.
I'll add some specific knowledge I picked up as it relates to the handful of images I'll be posting this week.
As far as this piece is concerned, it was the first one after two days of miserable failures that actually didn't involved all those stumbles. The color's dull, the brushwork boring, and there's an overall flatness, but it's fairly proportional and not too hard-edged. At last, something not too bad for me, but if you could see the skillful versions my classmates did, you'd agree this one is ready for scrubbing out!
3 comments: 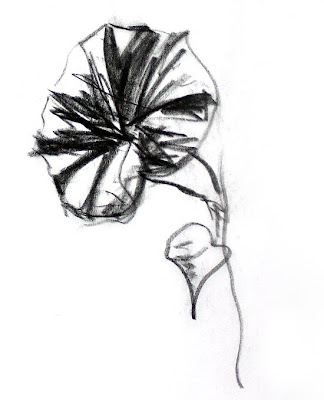 Recovering from the craziness that is the holidays, and getting ready for a weeklong workshop with Craig Nelson, which should be very illuminating. So, I'm practicing my sketches in readiness. No new paintings until my return.